With Finley starting his apprenticeship with us this year, it’s interesting to note that Aaron’s career started with his apprenticeship in 1991 less than a minute around the corner in Able Street at what was Don Pellatt repairs but is now known as Able Auto Repair/Repco Service Penrith. It was under the watchful eye of Steve Kennett-Tribe, that Aaron was shaped into the great mechanic he is. Steve became more than just a boss, he is a mentor and friend of Aaron’s.

Aaron & Steve are still close and collaborate often on car problems and race car setups, Steve has also taken on the role of mentoring Finley, the next generation of mechanics. It’s sad to note that after so many years of operation the business has now closed. 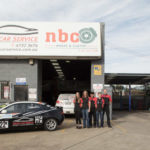 After completing his apprenticeship Aaron worked for various mechanics in Penrith such as Col Parry Automotive and Penrith Brake & Clutch and it was here that Aaron first pursued go-karting. Aaron then progressed to working as a mechanic in a V8 supercar team in the late 90’s. Aaron also worked at Lube Mobile for a short time, where he learned the art of customer service.

Aaron has also been involved as a Mechanic in Aussie Racing Cars and with Conroy Motorsport at the Bathurst 12hr. Fast forward and Aaron’s son Finley pursued go karting for many years. For the past 3 years Aaron & Finley have co-driven Mazda’s in the NSW Production Touring Cars series.

In 2006 Aaron and his wife Claire purchased Angus Mechanical Repairs, in 2013 they changed the name to Angus Car Service and earlier this year took their Son Finley on as an apprentice. It is now solely a family business as they  head into their 13th year in this business with Aaron as head Mechanic, Finley as a 1st year apprentice and Claire as Office Manager/Admin and Bookkeeper. 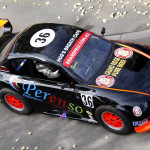 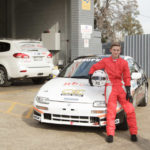 Aaron Hills is the man behind Angus Car Service (formerly Angus Mechanical). Aaron started his apprenticeship in Penrith in 1991 and has worked in the local industry for over 17 years through a variety of companies and roles. You can follow him on Google+.

View all posts by: Aaron Hills

Angus Car Service now service all our Company vehicles, as well as many of our staff’s personal vehicles.

We appreciate the promptness and thoroughness of the service we receive from Angus Car Service. Read more...

I thought that I would personally write to thank you for you prompt service. It is great to know that you are always there to help us out when we are in need of urgent attention.

Your team is always courteous and helpful no matter how big or small the job is. I will recommend your company to anyone who is looking for a good mechanic. Read more...

Angus Mechanical Repairs has been responsible for preparing and crewing for our Aussie Racing Car since our entry into the category.

I have to say that Aaron’s attention to detail and knowledge of what it takes to prepare, set up and develop a race car is second to none. Aaron’s ability to watch a car from the side of the racetrack, pinpoint the problems and implement resolutions to them sets him apart from the others.

I can confidently say that our strong results to date are as a direct result of our association with Aaron and his staff. I would highly recommend his services to anyone thinking about entering any motorsport category.

Angus Mechanical is the only place where I will happily leave the car to be worked on and have no need to check the work carried out afterwards. For me to say that its a big rap to them.

Thanks Aaron and team for all the help and I have no hesitation in recommending Angus Mechanical to anyone!